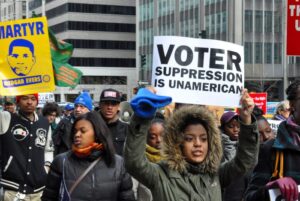 Honest to goodness, this is the truth, which is that I do not want to believe Republicans favor limiting Americans’ access to voting.

However, it is clear to anyone with a working brain that the GOP is aligned with those who want to restrict many Americans’ rights as citizens of this great land.

Texas Gov. Greg Abbott has sharpened his political long knife in endorsing a Republican plan to limit access to voting while the state is fighting the pandemic. He targets one of the state’s largest Democratic leaning counties, Harris County.

The Texas Tribune reports: At a press conference in Houston, Abbott served up the opening salvo in the Texas GOP’s legislative response to the 2020 election and its push to further restrict voting by taking aim at local election officials in the state’s most populous and Democratically controlled county. The governor specifically criticized officials in Harris County for attempting to send applications to vote by mail to every registered voter and their bid to set up widespread drive-thru voting, teeing up his support for legislation that would prohibit both initiatives in future elections.

Texas is not alone. Other states where Republicans command power are taking similar actions.

“These kinds of attempts to confuse, to intimidate, to suppress are a continuation of policies we’ve seen in this state since Reconstruction,” Democratic Harris County Judge Lina Hidalgo said. “It is a continuation as well of the big lie that’s being peddled by some far-right elements that the election in 2020 was somehow not true and should be overturned.”

What troubles me is that the phony charge of vote fraud is being used as political cover for more nefarious motives designed to prevent racial and ethnic minorities from being able to vote. My goodness, I hate thinking that is the real reason, but the actions of Texas Republican legislators — as well as Gov. Abbott and Lt. Gov. Dan Patrick — leave me with no choice but to assume the worst.

It sickens and saddens me.

One thought on “GOP = voter suppression”