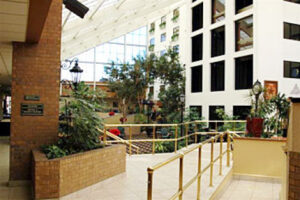 One of my sons occasionally serves as my eyes and ears in Amarillo, Texas, where my wife and I lived for 23 years before we moved to the Metroplex.

He posted something today that piques my interest greatly: Well, I passed by the old Ambassador Hotel site today and noticed a banner for some construction and remodeling company on the fence. Could it be that someone is finally going to resurrect that place? About time!

Texas Panhandle residents might be interested in this little bit of news. You see, the Ambassador Hotel once was the place to see and be seen. It was that place when my wife and I arrived in Amarillo back in early 1995. It was located on Interstate 40 and served as a way station for motorists traveling through the city, not to mention for artists who performed in Amarillo or just those artists who were passing through. It served as a meeting place for conventions.

It closed its doors a few years ago after going through some changes in names and ownership. It has been laying fallow ever since.

Now, according to my watchdog son, someone has posted some signage on the property, preparing to resurrect the structure.

This is a good thing for the city. Yes, there has been an enormous hotel construction boom along the I-40 corridor for many years. None of the hotels, as near as I have been able to see, has provided the kind of “full service” that was available at The Ambassador.

With all the commercial and entertainment activity that has sprung up downtown, it appears our former city of residence is getting new life pumped into an old structure that once was the place to go.

Who knows? It might retrieve some of its old glory.