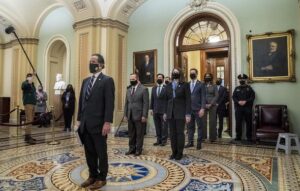 The evidence of incitement of insurrection has been searing, heartbreaking, graphic and it reveals a profound danger to our republic.

Despite what I believe we have seen in the impeachment trial of Donald John Trump, I fear it won’t move a sufficient number of Republican U.S. senators to do what they should do … which is convict the ex-president of the crime for which the House of Representatives impeached him for the second time.

Trump will get an acquittal. He likely will crow about it. The good news from my standpoint, though, is that his legacy — and I use that term with great caution — will be scarred forever by the knowledge that most senators believe he violated the sacred oath of his office.

He stood before the crowd of terrorists on the Sixth of January and implored them to march on Capitol Hill. He told them to “stop the steal” of an election he lost fair and square to President Biden. They tried to do as they were instructed to do by their hero, the disgraced president.

It won’t move enough senators to convict Trump. Which means the Senate cannot vote to ban this monster from ever seeking federal public office.

That will be to the shame of all the Republicans — and I am talking specifically to Texas’s two senators, Ted Cruz and John Cornyn, both of whom indicate no interest in doing the right thing.

They will hide behind the phony argument about the trial’s alleged unconstitutionality. They will look indifferently at the evidence, at the sight and sounds of terrorists storming the Capitol building, ignoring how many of their colleagues came to being physically harmed … or worse.

The good news, as I see it, will be that Trump will be marked forever as someone who sought to destroy the very government he took an oath to defend and protect.