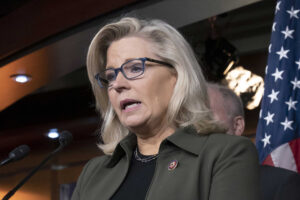 Donald Trump’s time in public office has resulted in many seemingly impossible events.

Such as turning me — an unabashed center/lefty — into a fan of a right-wing politician who, in this instance, is Liz Cheney.

Cheney is a Republican House member from Wyoming. She’s No. 3 on the GOP congressional leadership chart. She voted on Jan. 13 to impeach Donald Trump, deciding that Trump’s incitement of an insurrection was too much for her … and for the nation.

Rep. Cheney is right. Trump was as wrong as wrong can be to bellow his encouragement for the riotous mob to march on Jan. 6 on Capitol Hill to “take back our country.”

Cheney is now the target of Trumpkin Corps members among her colleagues in the House. They want to remove Cheney from her leadership post. The House GOP caucus, though, decided overwhelmingly to keep her in that position. Good for them.

Good also for Liz Cheney for standing up for the Constitution.