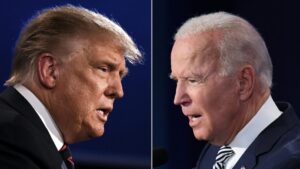 Ronald Reagan once asked famously during a 1980 presidential debate with President Carter whether the nation was “better off than we were four years ago.”

The question seared the audience that heard him ask it. Voters responded on Election Day 1980 with a stunning verdict: The answer was “no,” and they delivered a landslide victory to Reagan.

Rahm Emanuel, a former Chicago mayor and an acknowledged Democratic partisan, asked  that question today in terms of Donald Trump’s tenure as president. The answer, according to Emanuel, is an equally resounding “no.”

Therein lies the reason why Trump lost his bid for a second term, just as President Carter lost his own second-term run 40 years ago. The nation is fundamentally worse off today than we were when Trump took office.

Trump has presided over a horrendous coarsening of our national debate; he has inflicted heavy damage on our international alliances; Trump has governed by chaos and tossed continuity into the crapper; the POTUS has made full-throated lying an acceptable form of communication … and we have the pandemic.

I will not blame Trump for the virus that has killed more than 300,000 Americans. I do blame him fully for the shabby, shoddy and shameful response he has orchestrated. He lied to us about its severity from the get-go; he has contradicted the advice of his medical experts; Trump has put Americans at grave risk of death as a result.

The pandemic is an existential threat to our national security and Donald Trump has failed to remain faithful to the oath he took when he became president.

Have there been successes along the way? Sure. Israel’s relationships in the Middle East with neighboring Arab nations gives us hope for a more lasting peace in that region; prior to the pandemic’s arrival a year ago, our economy was experiencing significant growth. I will not short-sell those positive outcomes.

The pandemic and all the other failures, though, have left us worse off today than we were when Donald Trump took office and delivered an inaugural address that produced precisely one memorable moment: that “the American carnage” would come to an immediate end. Well, guess what. It hasn’t ended.

President-elect Biden has a monumental task awaiting him when he takes office in 31 days. Just as Americans spoke decisively 40 years when we elected President Reagan — who posed what has become the threshold question for all politicians — we have spoken yet again in electing President Biden.

One thought on “Are we better off? Umm, no!”