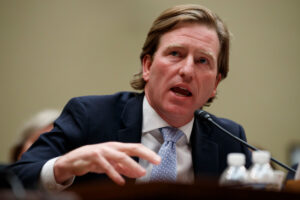 Donald John Trump has taken the “art” of revenge firing to a despicable new low.

The outgoing president of the United States decided to fire the man he hired to make our election more secure for — are you ready for this? — declaring that the 2020 presidential election is the safest and most secure in U.S. history.

What’s more, Department of Homeland Security official Christopher Krebs got word of his firing via Twitter, which is Trump’s modus operandi for issuing these policy pronouncements.

All Krebs did was issue a statement that runs diametrically counter to Trump’s narrative, which is that President-elect Biden won the election because it is “rigged.” Trump is hollering about “widespread voter fraud” where none exists. Krebs had the temerity to say as much in his statement to the world.

So now he’s gone. Trump has hired another lackey to take Krebs’s place … and the phony narrative will continue to fester on the public stage.

Hey, I realize I said I would concentrate on Joe Biden’s developing presidency rather than worry about what’s left of Trump’s term in office. I just cannot let this shameful example of vengeance go unnoticed. So there.

One thought on “Revenge firings … that’s what they are!”