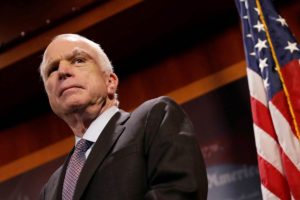 Right-wing radio gasbag Marc Levin took it upon himself to fire off a Twitter message aimed at Cindy McCain, wife of the late Vietnam War hero U.S. Sen. John McCain.

Cindy decided during the presidential campaign to endorse her husband’s dear friend Joe Biden, favoring the Democrat over the Republican who serves as president of the United States, Donald Trump.

What did Levin say to Cindy McCain? “You cost us Arizona,” he said, complaining about the apparent victory Biden scored in winning Arizona in the still-developing election result.

Umm. No, Mark. Mrs. McCain didn’t cost the GOP a state that had been in reliably Republican for many years. Donald Trump did it. All by himself!

He did it by denigrating Sen. McCain’s heroism while being incarcerated for more than five years during the Vietnam War. He castigated McCain repeatedly, even while he was fighting the cancer that eventually would take his life.

Arizonans had elected McCain to the Senate over many years for a simple reason: They respected his lifetime of service to the nation and the sacrifice he endured while being held captive during a time of war.

What’s more, he delivered valuable public service to the constituents he served in Arizona.

My advice to blowhards like Levin is simply to stop looking for others to blame for Donald Trump’s likely loss.

POTUS’s own big mouth did him in.