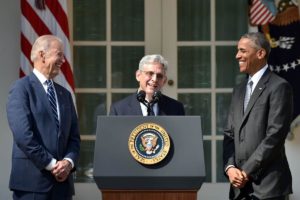 Merrick Garland is very much alive and well but his “ghost” floated throughout the hearing room today as a congressional hearing commenced on an appointment to the U.S. Supreme Court.

The U.S. Senate Judiciary Committee welcomed another federal judge, Amy Coney Barrett, as she began her confirmation hearing to the U.S. Supreme Court. She would take the seat occupied by the late Justice Ruth Bader Ginsburg, who died in September.

Garland’s role in this drama? Well, he once got nominated to the high court by President Barack Obama. Another justice, Antonin Scalia, died in February 2016 while on vacation in Texas. President Obama wanted to nominate a successor. Senate Majority Leader Mitch McConnell wasted no time in declaring his intention to block that effort. Why? Because the voters had a right to be heard before a SCOTUS nomination would be considered by the Senate.

We had a presidential election in 2016. Obama couldn’t run again. It turned out that Donald Trump would win the election. So, Trump got to select someone to succeed Scalia; he chose Neil Gorsuch.

The hypocrisy between then and now is stunning in its scope.

We were 10 months away from the previous election when a vacancy occurred. Now, we’re just 22 days before the next election. Don’t Americans have a right to have their voices heard before the Senate considers a nominee to succeed Ginsburg? Of course we do.

Except that Republicans who at the moment hold the majority of Senate seats are pushing full speed with the Barrett hearing.

Most astonishing of all is the comment that Committee Chairman Lindsey Graham made in 2018. He said then that if an opening occurs during Donald Trump’s term as president and the “primary season has begun,” the Senate should hold off until after the election before considering a possible replacement.

Graham said we could hold his words against him. Fine. Many of us are doing that, Mr. Chairman.

Amy Coney Barrett wouldn’t be my choice to join the court. I much prefer a jurist in the Merrick Garland mold: moderate, center-left in philosophical judicial outlook. Garland, though, never got the courtesy of a hearing, let alone a Senate vote, that appears to be in store for Judge Barrett.

It’s all because the Senate GOP majority played politics with the judicial nomination process in 2016 … and is doing so once again right now.