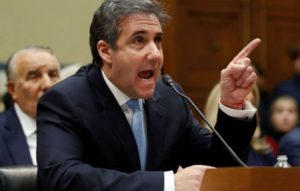 I am trying to figure out my feelings toward Michael Cohen, the former Donald Trump lawyer/friend/fixer who has turned ferociously against the man to whom he once pledged blind loyalty.

Cohen has written a book titled “Disloyal.” He has been making the talk show circuit from his home, given that he remains under house arrest for crimes he committed on Donald Trump’s behalf.

Cohen is a convicted perjurer, which is a legal word that means “liar.”

Now, though, he is trying to make amends for lying on Trump’s behalf. Cohen has talked about the treachery he performed for Trump, how he got sucked into Trump’s cult of personality. About how he fell for Trump’s sales pitch.

This mixed feeling I have toward Cohen is driving me a bit batty. My first instinct would be to salute Cohen for acknowledging the wrong turn he took years ago. However, the damage he did while working for Trump wipes away a good bit of that instinct to cheer Michael Cohen.

I don’t know if I will purchase “Disloyal.” I know a lot already about the man for whom he worked. He won’t tell me much of anything I don’t already believe about him. He says Trump’s hatred of Barack Obama is based exclusively on President Obama’s race … to which I say, “no sh**?”

Maybe, over time, my feelings about Cohen will crystallize. I cannot get there just yet. He means to make amends. I’ll at least give him credit for making the effort. For now, that’s the best I can deliver to this convicted liar.