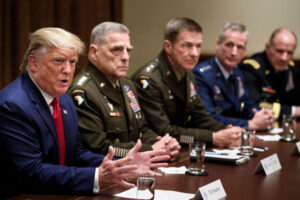 I cannot remember ever hearing an American president say the things that Donald Trump has said about the high command of the nation’s military.

Moreover, I also doubt the generals and admirals about whom Trump was referring had ever heard it, either.

Trump called a press conference on Labor Day and then decided to take off on a riff against the brass. He said the line soldiers, sailors, airmen and Marines like and respect him, but not so much with the top end of the chain of command.

He essentially accused the Pentagon brass of being war profiteers. They want to keep fighting “endless wars” because it keeps weapons suppliers in business, which Trump said suits the brass just fine.

Hey, I never got close the brass while I served in the U.S. Army, so I cannot speak with any actual authority on the subject. I just will posit the notion that generals and admirals who have been to war want no part of it even though they no longer thrust themselves into harm’s way.

How do I know this? I just do. I have talked over the years with enough junior- or field-grade officers who’ve seen combat to know how they feel about the idea of going to war. They hate war with a purple passion!

So, for Trump to effectively defame the Joint Chiefs of Staff and the officers who answer directly to them makes me wonder: How do these men and women continue to serve silently under a commander in chief who has no appreciation for what they have endured while serving the country they all love?