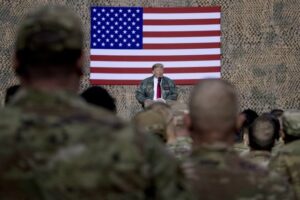 I have no doubt about the veracity of a story that has grown more legs than a centipede.

It involves statements attributed to Donald Trump in which he denigrates the service performed by wounded servicemen and women, those who were captured by the enemy and even those who gave their lives in defense of the nation.

He called them “losers” and “suckers,” according to the article published in The Atlantic.

Of course, Trump denies it vehemently. He has gone on the attack against the author of the piece, Jeffrey Goldberg, against the owner of the publication, and against the “fake news” media for reporting what Goldberg has written.

But think about it for just a moment: The statements attributed to Trump are wholly consistent with statements he has made publicly, out loud, and for the record about service personnel who have served with honor, valor and heroism.

He disparaged the late John McCain’s time as a Vietnam War prisoner; he castigated a Gold Star couple whose son was killed in action in Iraq; he criticized Admiral William McRaven after the special operations commander coordinated the mission to kill Osama bin Laden, saying he should have killed bin Laden sooner; he ridiculed Army Lt. Col. Alexander Vindman, who testified in the impeachment inquiry against Trump.

He feigns admiration for our servicemen and women. He brags about all the great things he has done for our veterans and for our active-duty personnel.

Still, he finds moments to denigrate the service of those who serve their country.

He wants us to believe he didn’t say those things attributed to him in The Atlantic? He must be out of his ever-lovin’ mind to believe Americans should accept his overheated denials.

I believe this story will continue to grow even more legs as we move toward the end of the presidential campaign. As it should. It rings true to this veteran’s ears. I suspect there are others among us who will be as repulsed as I am to read the things that fly out of the mouth of the man masquerading as our commander in chief.