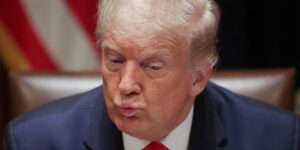 I went to sleep last night after having just read a horrifying tale detailing Donald Trump’s profound disrespect for men and women who have paid the price of defending our freedom against our enemies.

I awoke this morning still believing what I had read.

The Atlantic has reported a litany of examples of Trump disparaging the service that our military personnel have performed. Not to mention the price some of paid with their very lives.

The reporting by Jeffrey Goldberg appears to be well-sourced … and it is credible.

What gives the story its credibility, at least to me, are the words that Trump blurted out in public in 2015 when he was asked to comment on the service performed by the late Sen. John McCain. Someone asked Trump if he considered McCain to be a war hero. Trump’s answer spoke volumes.

McCain is a “hero only because he was captured” by the North Vietnamese after being shot down during the Vietnam War, Trump said. Then he said, “I like those who aren’t captured, OK?”

Can there be any more validation of what Jeffrey Goldberg reported than Trump’s own words? Of course, Trump denies disparaging those who served and died in defense of the nation. The White House has issued a denial as well. You would expect that from both the president and those who work for him.

However, the ring of truth to what has been reported is clanging in my ear. I happen to believe that the man with no public service in his pre-presidency background, the guy who sought bogus medical deferments from serving in the Vietnam War is fully capable of saying what has been reported.

I believe we have been handed a graphic and hideous example of this individual’s unfitness for the job he is trying to keep.

If you read the entire story that I have attached here, I trust you’ll be as horrified as I am. The real “loser” in this episode is the individual who has thrown the term around about our nation’s heroes.