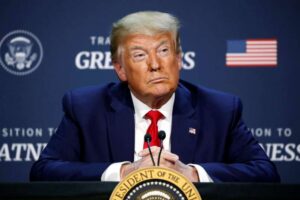 How is this supposed to work?

Donald Trump campaigned for the presidency in 2016 by proclaiming that the country was in dire peril. He said “I, alone” can fix the nation. He won the election and then delivered an inaugural speech remembered for one line: “This American carnage ends right here and right now.” It was a dark, foreboding speech.

Four years later he is campaigning for re-election by summoning voters to the same fear he harvested in 2016.

How is that supposed to make voters feel better another four years under the leadership of the Carnival Barker in Chief?

Donald Trump is presiding over a nation that is in infinitely worse condition than it was when he took office. How does he tell us he can repair what is so badly broken now?

To be fair, he didn’t cause the pandemic that has killed 160,000 Americans. His failure to respond proactively at the front end, though, clearly must be considered the cause for so many of those deaths. Oh, and the economy? It has collapsed. The one aspect that Trump sought to hail as his signature positive argument has been destroyed by the pandemic.

He is going after Joe Biden, the presumed Democratic nominee, hammer and tong. He is accusing Biden of wanting to ruin the suburbs, take our guns away, of being “against God,” of being a “far-left” politician.

Where are the accomplishments on which Trump wants us to re-elect him? They don’t exist. Trump’s campaign looks almost identical to the previous one.

How does this equate to a re-election strategy?