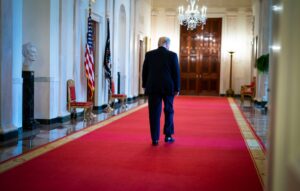 When I hear Donald J. “Criminal in Chief” Trump proclaim himself to be the “law and order president,” I cannot stop thinking of all the individuals who helped elect him and who served in the government who are, um, fighting to stay out of prison … or who actually are serving prison terms.

He channels another crooked president, Richard Nixon, who made many of the same proclamations while running for president in 1968 and again in 1972. It didn’t work out well for President Nixon, whose attorney general went to prison along with his chief of staff, chief domestic policy adviser and an assortment of campaign flunkies. Nixon, of course, quit the presidency just as the House of Representatives was preparing to impeach him. The Senate was sure to convict him as well of obstruction of justice and abuse of power. So the president, cutting his losses, high-tailed it to San Clemente, Calif.

So, I guess Trump is channeling Nixon, all right. You see, he is facing the same sorry outcome for his various minions, too. Yet he continues to declare he is going to bring “law … and order” to America “right here and right now.” Give me a break, dude.

I actually am believing that Donald Trump is outperforming Richard Nixon in the Crooked Presidency Sweepstakes. Good grief, I have lost count of the criminal indictments that have landed in the laps of Trump toadies. Some of them have resulted in guilty pleas and prison time.

So, when Donald Trump makes his “law and order” declarations, I am inclined to suppress derisive laughter. Except that it isn’t funny. The presidential imposter is a disgrace to the office he occupies.