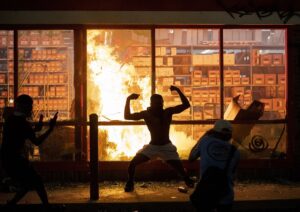 George Floyd is the latest in a long and distressing line of African-Americans who have fallen victim to police cruelty. I’ve seen the video of the Minneapolis cop pressing his knee on the back of Floyd’s neck, watching him pass out after pleading with the officer to release him because he couldn’t breathe.

Floyd’s death has sparked justifiable outrage and anger among many Americans, black and white.

However … I want to speak about the mob mentality that has overwhelmed Minneapolis. We are witnessing the worst possible way to call for “justice” for George Floyd, who died day after being manhandled by the cops.

The Minneapolis Police Department fired the four officers immediately after the incident. That isn’t enough. There needs to be a thorough investigation into whether they committed a prosecutable crime. I am inclined to believe they did.

The rioting, looting and, yes, the reported death of a resident in all the mayhem is what I want to address here.

Civilized human beings never should destroy property to supposedly protest an injustice that has been done. The scenes of the fires, the smashing of motor vehicle windows, the theft of items by looters does not advance a single noble notion if society is going to put an end to the type of conduct we have witnessed — yet again — by law enforcement officers against an American citizen.

I am sickened by what we have all seen prior to George Floyd’s death. He wasn’t resisting arrest for a non-violent crime. He was, as I saw it, killed by an officer who went far beyond what is normal and humane.

I also am sickened by the sight of the looting, vandalism, mayhem and outrageous behavior of citizens who are doing far more harm than good in their quest for justice.

I fear they might have dishonored the memory of George Floyd.

Justice can be found, but not this way.