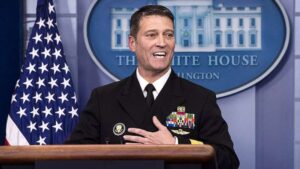 We made a quick return this past weekend to the Texas Panhandle to see our son and to, oh, just get away from the house for a bit.

Along the drive both ways along U.S. Highway 287 I noticed campaign signs for a single congressional candidate, a guy named Ronny Jackson, who’s running for the Republican nomination for the 13th Congressional District.

It occurred to me on our drive to Amarillo and then back to the house in Princeton: How did this guy Jackson manage to persuade voters that he knows anything about their needs, their desires, their concerns?

Then it dawned on me: Carpetbagging is in vogue these days.

Jackson has never lived in the 13th CD. He was born in Levelland, which isn’t in the district. He moved away, though, to attend college. He obtained a medical degree. He rose the rank of Navy vice admiral. He served as physician to two presidents: Barack Obama and Donald Trump.

What does he do then? He runs for Congress in a district being vacated by a longtime Republican House member, Mac Thornberry of Clarendon, who isn’t running for re-election this year.

Look, being a stranger to a congressional district or a state while running for public office isn’t new. Robert Kennedy sought a U.S. Senate seat in New York in 1964, with only a passing knowledge of the state; so did Hillary Clinton in 2000; this year we have numerous candidates running for Texas congressional seats who have never lived in those districts.

I don’t have a dog in that fight any longer, as I no longer can vote in the 13th Congressional District. My memory is pretty good, though, and I have trouble understanding how this guy, Ronny Jackson, has positioned himself to possibly be elected this year representing a congressional district about which he knows nothing.

Is this how we define “representative government” these days?