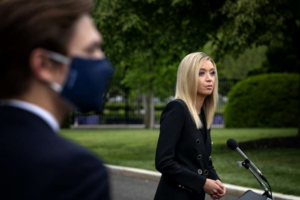 I’m over here, Kaylee McEnany. Call on me! I can answer your question about why the media don’t take Donald Trump “at his word.”

The White House press secretary just can’t fathom the distrust that so many Americans have built up over her boss’s inability to tell the truth. Why, I never …

He said he is taking hydroxychloroquine, the unproven drug that many doctors and other scientists say poses risks during the coronavirus pandemic. Many of us reacted with extreme skepticism about Trump’s declaration. Why is that? It’s simple, Kaylee.

The man can’t tell the truth if his life depended on it — and I intend to use that phrase in this context because the drug he says he’s taking well might put his life in some jeopardy. As the docs have warned him.

McEnany said: “The reason is the president of the United States said it, and if it were any other president … the media would take him at his word.”

Well, duh! Again, young lady, it’s simply a matter of the trust that Trump has squandered through his torrent of lies. The dude can’t tell the truth about big things, little things, issues that matter and those that don’t matter a bit.

I am one of those Americans who doesn’t believe a single thing that he says. Nothing, kid. Zero.

So, stop making foolish assumptions about the POTUS.

The man is a liar.

2 thoughts on “It’s because POTUS is a liar”