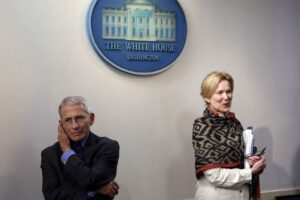 This must be the “chaos” that Barack H. Obama referred to in that leaked phone call to the Obama Alumni Association.

The former president of the United States has categorized Donald Trump’s response to the coronavirus pandemic as “chaotic.” Yep. He said it. I believe it.

So now we have this: Drs. Antony Fauci and Deborah Birx, two of the nation’s leading infectious disease experts, reportedly are being shoved aside while Trump seeks to concentrate on cheerleading the nation back to economic vitality.

It matters not a damn bit to Trump that Fauci and Birx have actual expertise to offer the nation as it seeks answers to the pandemic that has killed 80,000 Americans and is threatening to kill many thousands more of us.

As Politico reports: The broader turn away from the health issues at the core of such a all-encompassing national emergency is just the latest chapter in a communications strategy that’s long confounded and frustrated public health experts.

Trump is more interested in his own political future than in the health of his fellow Americans. That is the major takeaway I am getting from all of this back and forth.

We are dealing first and foremost with a health crisis. Americans are being felled by the thousands each day. Many of those sickened are dying, for crying out loud! Yes, we also have an economic crisis with which to deal. However, Donald Trump must not shun the experts who are supposed to offer clear-headed, objective analysis of the health risks to a nation that needs it far more than it needs cheerleading and exhortations to get back to work.

And it’s the chaos that serves as the common thread that runs through Donald Trump’s mish-mash approach to solving a problem that needs maximum focus … which needs to fix itself on the health of Americans.