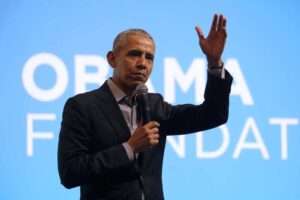 Barack Hussein Obama is speaking out, labeling Donald John Trump’s response to the coronavirus pandemic as “chaotic,” and criticizing the Justice Department decision to forgo prosecuting an admitted perjurer.

So, you might ask: What is a former president doing here? Isn’t it “normal” for a president to remain quiet about how his successor is doing? Sure it’s normal. Indeed, President Obama has been quiet.

Except for this: Donald Trump keeps invoking his immediate predecessor’s name, criticizing his policies and declaring — mostly without justification — that he has fixed the things that Obama got wrong.

A leaked phone call to a group called the Obama Alumni Association has the former president describing Trump’s response to pandemic as “chaotic” because Trump has been too preoccupied with “what’s in it for me?” rather than fixating on the problem and the suffering of his fellow Americans. Obama also is going all-in for Joe Biden, the presumptive Democratic nominee and vows to work as hard as he can to ensure Biden’s election this fall.

I normally would take some alarm at a former president playing such an active role in a campaign involving his immediate successor. However, Trump — as I have noted — brought all this on himself by continually seeking to denigrate the service that Obama rendered during his two terms as president.

A quick review: Obama inherited an economy in free fall; he pushed Congress to enact stimulus packages to rescue the economy; the nation began a 10-year job-growth climb; he ordered the commando raid that killed Osama bin Laden; the State Department negotiated a deal to deny Iran access to nuclear weapons; he reduced the annual federal budget deficit by two-thirds; he handed Trump a robust economy.

Trump, though, doesn’t see it that way. So he keeps seeking to criticize Obama.

Now it appears that it’s game on for the former president.

Hey, I don’t hide my affection for the former president and my disdain for the current clown masquerading as president. Thus, if the current White House occupant wants to invoke President Obama’s name continually, well … bring it. I’m quite sure Barack Obama can find plenty more to say in response.