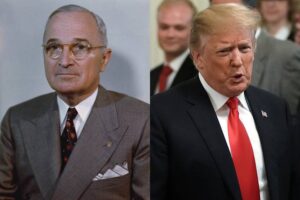 Donald John “Buck Passer in Chief” Trump took a question this afternoon from a reporter who asked if the president took “responsibility” for the lack of testing kits available to help detect the coronavirus among Americans.

Trump called the reporter’s inquiry a “nasty question,” but then added that he takes “no responsibility at all,” even though the Trump administration dismantled the safeguards it inherited to deal with crises such as what we’re experiencing at the moment.

Trump said he didn’t know about the dismantling of the team that had been formed. He looked around at the folks standing with him in the White House Rose Garden for someone who could answer the question directly.

Wherever he is, President Harry Truman is seething. It was President Truman who famously displayed the sign on his White House desk that declared that “The Buck Stops Here.”

That is no longer the case. Donald Trump doesn’t accept any responsibility for any decision that reflects badly on him, the administration or the presidency itself.

Consider, finally, something that I have noted already on High Plains Blogger: Donald Trump stood before the Republican National Convention in Cleveland in the summer of 2016 and pronounced to the entire world that “I, alone” can repair what he said ails the nation.

That was a lie, too.