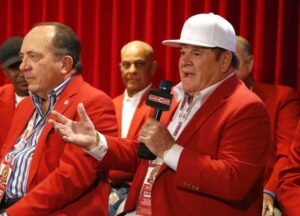 I am directing these brief remarks to Major League Baseball Commissioner Rob Manfred.

Mr. Commissioner, do not knuckle or buckle under the pressure to reinstate Pete Rose, to bring the former Charlie Hustle back into MLB’s good graces. Rose has asked Manfred to be reinstated. He cites the relatively light punishment given to the Houston Astros for their high-tech sign-stealing in the 2017 World Series. C’mon, man. That’s apples and oranges.

Rose bet on baseball games. The MLB rules, which the commissioners knows better than I do, state categorically: Anyone who bets on big-league baseball games is subject to a lifetime ban from the game.

Lifetime ban needs to mean what it declares.

Pete Rose is still drawing breath among us. He broke a clear-cut, unambiguous rule. He should pay the price that he received from one of Manfred’s esteemed predecessors, the late A. Bartlett Giamatti.

Yes, he played a great game of hardball … even with supposedly limited athletic skill. He bet on baseball seemingly because he had a fetish he couldn’t control.