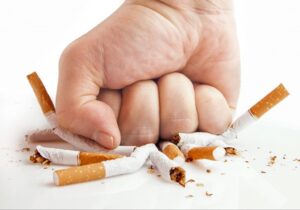 I can’t believe I almost forgot about this landmark anniversary.

It was 40 years ago this past Sunday that I changed my life for the better and perhaps even lengthened it.

I quit smoking. Cold turkey, man! I didn’t need no prescription drug to wean me of the weeds. I didn’t need any counseling sessions, other than with my wife.

I started smoking at about the age of 15. By the time I reached age 30, I had become a two-pack-a-day man. The cigarettes have taken a toll on my health. I developed a nagging “smoker’s cough.” But, what the heck, a cigarette would make it go away … or so I deluded myself.

My next thought at that moment was this, and I kid you not: What the hell am I doing here?

I snuffed that cigarette out. I tossed it into the garbage. Then I reached into my pocket for the pack of cigarettes waiting to be lit, crumpled it up and threw it, too, into the trash.

I was done. Finished. I haven’t put a lit cig to my mouth since. I have become somewhat militant about smoking as I have aged over the years. So has my wife. My total aversion to smoking has caused some tension, truth be told, among those with whom I have socialized. Here’s my favorite example of what happened.

More than 10 years ago, I was touring Israel with four of my best friends. We attended a party in the southern part of the country. There was plenty of food and beverage. At the end of the meal, our hosts lit up a hookah, which we used to refer to in the old days as a “water pipe” or “bong.” I was asked if I wanted to partake. I said “no.” They kept insisting. I kept saying “no” with even more vigor than the previous time. This back/forth went on far longer than I wished.

At the end of it, I am certain I offended my hosts by not enjoying the hookah vapors. What I could not explain to them was that smoking from that device terrified me. I never was a casual or “social” smoker. I was addicted to nicotine. The addiction frightened me to never wanting to be tempted again beyond my strength.

And so it has gone. I read not long after I quit smoking that one’s lungs can restore themselves over time. I surely trust that has happened to me.

What’s more, I long ago quit calling myself a “former smoker.” I am a non-smoker … and proud of how I became one.