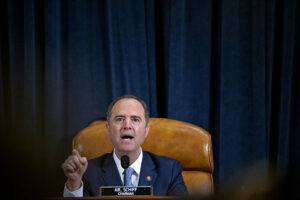 I have this kooky notion I feel like sharing. The House Intelligence Committee is going to issue a draft report Monday on its findings regarding the impeachment inquiry hearing it conducted with regard to Donald Trump, Ukraine and the allegation of, um, “bribery.”

It will be a partisan report, authored by Democratic members and staffers. Why not allow the Republicans to issue their own version of events? Why not put the GOP response out there alongside the Democrats’ response and let the public decide which party is speaking to the issues and which one is seeking to deflect attention from the cause of this inquiry in the first place: the behavior of the president of the United States?

I am all for hearing how the Intel Committee Republicans justify their badgering, their hectoring, their seeking to undermine the motives behind the inquiry. I want the public to be able to digest both versions in real time and to decide which side has the facts on its side and which side is trying to provide cover for POTUS’s backside.

The Intel Committee will hand this investigation off to the Judiciary Committee, which begins its own hearings on Wednesday. I don’t know how the Judiciary panel will take. I hope they can wrap this up quickly, decide whether to adopt articles of impeachment and then send this matter to the House floor, where the Democrats are likely to impeach this presidential imposter.

But first … let’s hear how the GOP defends this guy’s impeachable conduct. Hey, fair is fair!