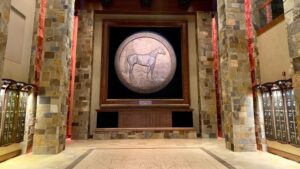 A friend in Fort Worth sent me a message a while ago telling me about reports surfacing over there about the American Quarter Horse Association possibly relocating from Amarillo to Cow Town.

I called Fort Worth City Hall and confirmed that there was a City Council agenda item dealing with a possible permit request from AQHA. The City Hall source couldn’t confirm that AQHA was set to pull up stakes and move from Amarillo to Fort Worth.

Now I see a social media link from another friend of mine that deals with a petition drive — begun my Mayor Ginger Nelson — that seeks to keep AQHA in Amarillo. There’s no mention of where the AQHA museum would go, only that it is seeking support calling for it to remain up yonder in the Panhandle.

To quote the comic Arsenio Hall, it’s one of those things that “makes me go ‘hmmm.'”

The message notes that AQHA has been in Amarillo since 1949. It was formed to salute the impact that horse-breeding has on working ranches throughout the entire High Plains region, which includes the Oklahoma Panhandle and much of eastern New Mexico.

The post concludes: “Amarillo and Canyon Citizens: Help us tell the story of AQHA and why it is important that they stay here along the I-40 corridor where millions of people travel through Texas. Let’s show some AQUA love. Let’s save the horses.”

They have even developed a hashtag: #PleaseStayAQHA.

I have determined, therefore, that two plus two still equals four. My Fort Worth friend well might be on to something with regard to the future of the AQHA.

It truly would be a shame if the association vacates Amarillo for another Texas community.

Check out the petition information here.

It looks to me as if something is afoot.