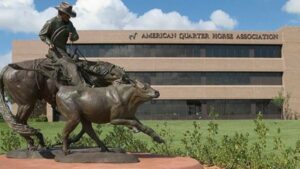 Well now, it turns out I’m a bit slow on the uptake … which isn’t too much of a surprise. My critics accuse me of such things on occasion.

The Fort Worth City Council has approved a 50-year lease that could portend a relocation of the American Quarter Horse Association Museum from Amarillo to Fort Worth.

Hmm. What do you know about that? It turns out my Fort Worth pal was right when he sent me that message, that a move might be in the works. And it further cements the reason for the petition drive launched by Amarillo Mayor Ginger Nelson to try to persuade AQHA to stay put, to remain where it has called home for 70 years.

I hope the petition drive succeeds and that the AQHA board feels the love that it has enjoyed in the Texas Panhandle for all that time.

However, major cities such as Fort Worth don’t approve 50-year lease agreements without some confidence that the move will bear fruit.

AQHA officials say the “ground lease” does not guarantee a move is imminent. They note that that fundraising efforts in Fort Worth have accelerated. They also express appreciation for their “Amarillo employees” who have worked to make the AQHA museum such an integral part of the community.

OK. So the die isn’t cast. At least not yet.

I wish I felt better about Amarillo’s role in the AQHA future. I am trying to remain optimistic that AQHA will stay put.

However, at the moment it is a serious struggle.

One thought on “AQHA gets an offer for a new home”