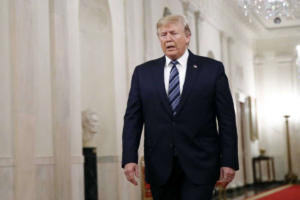 I haven’t decided whether I will read “A Warning,” a book written by someone known only as Anonymous.

That said, I am interested in the contents of the book, some excerpts of which have been obtained by The Washington Post. My reluctance in buying the book and reading all of it is my concern that someone with the kind of salacious detail about Donald Trump hasn’t found the courage to identify himself or herself to the public.

OK, now that I’ve gotten that out of the way, what I have seen in the Post’s article about the book sends chills up my spine. It does seem to confirm what I and many millions of others have believed from the get-go of this man’s presidency: Donald Trump is unfit for the office.

Anonymous writes that a large number of senior aides contemplated resigning en masse to protest the president’s behavior and his handling of policy matters.

According to the Post: “I have decided to publish this anonymously because this debate is not about me,” the author writes. “It is about us. It is about how we want the presidency to reflect our country, and that is where the discussion should center. Some will call this ‘cowardice.’ My feelings are not hurt by the accusation. Nor am I unprepared to attach my name to criticism of President Trump. I may do so, in due course.”

The author does tell about Trump’s intellectual shallowness, his lack of attention to any sort of detail, his absolute absence of curiosity about the nitty-gritty of policy. The writer says Trump operates solely from within his gut and hunch and surrounds himself exclusively with sycophants who are unwilling to tell the president the truth.

It paints an utterly ghastly future for a second Trump term if hell freezes over and he gets re-elected a year from now.

From what I have heard so far from Anonymous, my skin is crawling at the prospect.