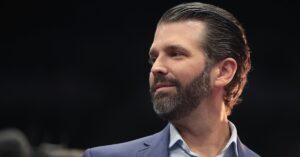 Donald J. Trump Jr. is hawking a book with his name on it that, he says, seeks to fight back against what he calls mean-spirited attacks from the far left wing of the political spectrum.

Then he goes a step or three too far. He has declared on live TV that Republicans have sat back for “too long” while the left beats the daylights out of them with their attack machine.

Wow, man! Hold on for a second or two. Let’s take a walk along the political memory lane.

1972: President Nixon was running for re-election. His Democratic opponent was U.S. Sen. George McGovern, a fervent Vietnam War critic. He wanted the United States to end the war immediately. The Republican Party and the president’s re-election committee labeled McGovern a patsy, a wimp, a dovish coward. They questioned his patriotism and love of country. Oh, and then there’s this: Sen. McGovern was a decorated World War II U.S. Army Air Force bomber pilot who flew into harm’s way in Europe.

1992: President George H.W. Bush ran for re-election against Arkansas Gov. Bill Clinton. The Republican National Committee, along with heavily financed political action groups, sought to link Gov. Clinton and his wife, Hillary Rodham Clinton, to the deaths of former aides. The implication was that the Clintons were somehow complicit in their deaths. The attacks continued even after Clinton was elected that year, with some on the right suggesting that they murdered their close friend Vincent Foster, who committed suicide shortly after President Clinton took office.

That’s an example, too.

2004: U.S. Sen. John Kerry was the Democratic presidential nominee. Prior to becoming a U.S. senator, he held elective office in Massachusetts. Prior to that he was part of a group called Vietnam Veterans Against the War. And, yes, he also had served heroically in Vietnam as a Navy swift boat officer. He was awarded several medals, including the Bronze Star, Silver Star and Purple Heart. But some foes on the right decided to “Swift Boat” Kerry, suggesting he didn’t really serve with valor. They launched a vicious, defamatory attack on his character. One of the chief financial sponsors of that hideous attack was the late Boone Pickens, the former Amarillo oil and natural gas tycoon.

OK, I have one more example.

2008: U.S. Sen. Barack Obama ran for president as the Democratic nominee. Some notable Republicans felt compelled to question whether the African-American presidential nominee was qualified to run for the office. They said he was born in Kenya. They challenged his constitutional eligibility. Obama said he was born in Hawaii in 1961. His mother was white; his father was a black Kenyan. He didn’t know his father and was raised by his mother and her parents, who lived in Kansas. All of his efforts to persuade his critics fell on largely deaf ears.

One set of deaf ears happened to belong to Donald J. Trump Sr., the current president of the United States and father of the nincompoop who is saying that Republicans have been silent for too long.

My point is this: Don Jr. needs to stop lying about alleged Republican “silence” in this toxic and vicious political climate. They have contributed more than their share of poison.