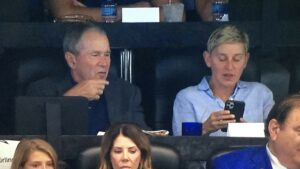 I hereby endorse Ellen DeGeneres in her declaration that she is friends with former President George W. Bush and former first lady Laura Bush.

The comedian is taking flak because she happened to attend a Dallas Cowboys football game at AT&T Stadium, where she sat next to the former first couple, had a few laughs and enjoyed each other’s company.

DeGeneres noted out loud the other day that it does strange for a “gay liberal” such as herself to be friends with a “conservative” such as President Bush. Which makes me respond: So what?

Ellen is taking heat from some in the entertainment industry. Actor Mark Ruffalo commented via Twitter that Bush’s policies are anathema to the “kindness” that DeGeneres mentioned in her comments about her friendship with “W.”

Look, I get it. I am not “friends” with the former president, although I have had the pleasure of meeting him three times over the years. The first time was on an elevator at the 1988 GOP convention in New Orleans; the second time was in 1995, when I interviewed the then-new Texas governor at his office at the State Capitol; the third time was in Amarillo in 1998 when he was running for re-election as governor.

My impression of President Bush is clear: He is the kind of guy I would love to have a beer with … except that he no longer drinks alcohol. He is affable, jovial, personable, humble and all-round good guy. His politics stink, but as Mitt Romney once said during the Al Smith Memorial Dinner in 2012 when he appeared on the same dais as President Barack Obama against whom he was running, “There is more to life than politics.”

So it is with Ellen DeGeneres and President Bush.