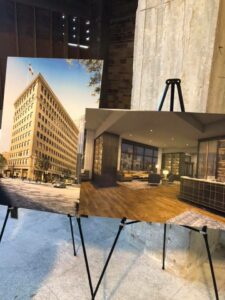 There’s no way in the world to overstate the surprise I felt when I heard the news, that a developer had decided to remake the Barfield Building in downtown Amarillo and turn it into a “boutique hotel” with the Marriott name.

Yep, it was a shock. The picture you see with this blog post comes from Neal Nossaman, a Facebook friend of mine who posted it on the social media site.

The Barfield is going to open in the spring. Crews have been working on gutting the interior, gussying up the exterior and turning the rotted-out building into a hotel; it also will have, as I understand, some retail space as well.

I would see the Barfield Building over many years continue to deteriorate. It sat vacant for more than four decades. It became a haven for transients who needed shelter from the heat and the cold.

The Barfield had a series of owners who tried and failed to secure funding for renovating the structure. Some of the owners were out of towners; some were locals. They couldn’t pull it together.

Then suddenly and shockingly, there was this announcement a year ago that Marriott had signed on to re-do the building. Plans emerged to turn this structure into this “boutique” hotel. I’m still not sure how a “boutique” hotel actually differs from a regular hotel. Whatever. The work has progressed.

They have a completion date in view.

My surprise notwithstanding, I simply am thrilled to see a once-rotting hulk of a building get new life.