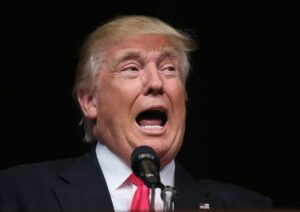 He strolls out onto the White House lawn and after revealing that he asked Ukraine for help in investigating former VP Joe Biden and his son, Hunter, he calls on China to do the same thing.

I don’t know about you, but I didn’t see him winking or smirking when he said it. Gosh, he seemed quite serious about it. Didn’t he seem that way to you as well?

He’s in some scalding water at the moment because of his solicitation of foreign governments to help him get re-elected and do destroy the candidacy of someone who might run against him in 2020. House Democrats have launched an impeachment inquiry and are going to impeach the president, maybe quite soon.

Oh, but now Trump’s GOP allies in Congress say he was just kidding. He didn’t really mean for China to investigate anyone, especially the former vice president of the United States.

Man, the president has to improve on his comedic timing.

Oh, but he wasn’t kidding. Any dunderhead observer who saw him make that statement didn’t presume Donald Trump was merely making a bad gag.