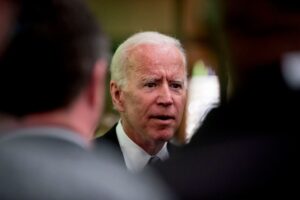 First, I want to state the obvious, which is that I want Donald Trump removed from the presidency of the United States.

My third choice, and the one that makes the most sense, is for the Trump-Pence ticket to get drummed out of office on Election Day, 2020.

Will that third option come true? Not based on what many millions of us have witnessed in the first two rounds of Democratic Party presidential primary debates.

I heard the term “circular firing squad” after the Wednesday night encounter. The Man in the Middle was the former vice president, Joseph R. Biden Jr., the clear frontrunner for the Democratic presidential nomination … at least for the moment.

None of the candidates running for the nomination seem able to combat Donald Trump, the gut-fighter Republican incumbent who might be poised to insult his way to re-election.

Trump will not invoke a clear and grand vision for the future. He won’t offer a second-term agenda, because he doesn’t have one. He won’t appeal to our better angels by telling us the “best is yet to come.” He’s going to attach hideous nicknames on whomever the Democrats nominate for president and vice president and is going to toss out innuendo after ghastly innuendo at them.

What are Democrats doing to prepare for that? They’re beating the hell out of each other, notably former VP Biden. As for the ex-veep, he needs to find a formula to counter those attacks and to turn his sights directly — and with extreme focus and prejudice — on Donald Trump.

Is he capable of doing so? I do not know at this moment. Is there another in that huge field of Democrats ready to assume the frontrunner’s mantle and then take the fight directly to the carnival barker/con man in chief? Hah!

That’s the bad news. I have some good news to pass along.

We’re still very early in this nominating process. A lot can happen. It probably will. That huge field of candidates will start to thin out soon. Then we’ll get to the serious contenders and weed out more of the pretenders along the way.

However, at this moment I am not feeling good about what might be waiting for us down the road.