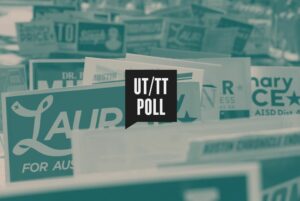 I have some good news — depending on your point of view — about Texas’s short- and immediate-term political future.

The state might become a “battleground state” in the 2020 presidential election. Do you know what that means? It means the Republican and Democratic presidential nominees and their running mates are going to spend lots of time here campaigning for votes.

Why is that a big deal? It’s big because I happen to be one voter who prefers to hear candidates up close.

Texas hasn’t been a battleground state for several presidential election cycles. Republicans have owned the results since 1976, when the last Democrat — Jimmy Carter — won the state’s electoral votes.

A new poll by the University of Texas and the Texas Tribune says about 50 percent of Texans want someone other than Donald Trump to win the election next year. Of the Democrats running for the White House, former VP Joe Biden is leading; former Texas Congressman Beto O’Rourke also is polling well.

Here is an important caveat: These polls are practically useless this far from an election. People’s minds change. Candidates have ways of appealing/pandering to those on the fence.

But I’m going to hang on to the hope that Texas becomes a battleground state in 2020. Republicans have taken the state for granted; Democrats who have toiled in the wilderness haven’t bothered with Texas.

Is this the election cycle it changes? Oh, I hope so.