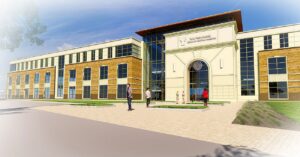 There once was a Texas Panhandle state representative who semi-seriously thought the Panhandle should separate itself from the rest of the state because, he groused, state government ignores the region.

That state rep was David Swinford, a Dumas Republican first elected to office in 1990. I asked him about that notion when I first met him in 1995 and he didn’t exactly deny it.

Well, Swinford has retired from the Legislature. And to its credit, the legislative body has restored faith in many in the Panhandle. How? By appropriating enough money — $17 million — to build a school of veterinary medicine in Amarillo.

This is great news for the region. A lot of folks are taking credit for ensuring the Legislature made this event a reality.

The Texas Tech University System is going to build the vet school, the second one in Texas. The first vet school is run by the Texas A&M University System. Aggieland opposed Tech’s initiative. Tech wasn’t going to be denied. It lined up plenty of political backing in the Panhandle and the South Plains.

Amarillo Matters, a political action committee formed a couple of years ago, is one organization that is taking credit for pushing the Legislature to act. Amarillo Matters said this on its website:

“Not only does the budget include startup funding for the vet school, but it also includes a directive for Texas Tech to move forward developing the school,” Amarillo Matters President Jason Herrick said. “This is great news for Amarillo, the Texas Panhandle and South Plains, and our state as a whole.” The school will help meet the growing need for large animal and rural veterinarians across the state. It will also increase the opportunities for Texas students to further their education without leaving the state.

“Legislative approval of the Texas Tech veterinary school is a watershed event for West Texas, the Texas Panhandle, and all of Texas,” former Texas Tech University System Chancellor Bob Duncan said. “This culminates years of hard work by literally hundreds of individuals who recognized the unmet demand for rural and large animal veterinarians throughout our state,” Duncan added.

Here’s my essential point: State government has not ignored the Panhandle. Yet one hears the occasional gripe from those who think it still does. Let’s lose the attitude, my former Panhandle neighbors. The Panhandle has plenty of legislative clout and it used it effectively for the benefit of the delegation’s constituents.

I also doubt that my friend David Swinford is among the soreheads.