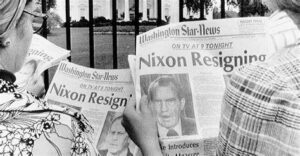 It was 47 years ago today that some burglars got caught breaking into the Democratic National Committee headquarters in Washington, D.C. It turned out eventually that the burglars were acting on behalf of the Committee to Re-Elect the President — aka the hilarious acronym “CREEP.”

The scandalous nature of the burglary took time to unfold before the nation. When it did, all hell broke loose. We learned about how President Nixon sought to, um, “obstruct justice” by seeking to stop the FBI investigation. There were those infamous tape recordings. The Senate seated a select committee to get to the bottom of it.

Once it did, then the House Judiciary Committee launched impeachment proceedings. Then it voted to impeach the president, with several Republican members joining their Democratic colleagues.

Nixon then quit the presidency.

Why is this remarkably pertinent today? Because another scandal is growing in Washington that well could result in another presidential impeachment. As stupid as the current troubles surrounding Donald Trump might seem, they fail the Stupid Test standard established by CREEP.

When the burglars broke into the DNC office on June 17, 1972, the Republican president already was headed toward a smashing re-election victory. The Democrats later that summer nominated Sen. George McGovern, who then went on to lose to Nixon in a landslide. Nixon carried 49 states, rolled up 521 electoral votes, trounced McGovern by 23 percent in the balloting.

Yet the CREEP moguls thought it was worth their time to rifle through the DNC files to look for additional dirt on the Democratic Party and on McGovern.

I cannot fathom a more stupidly conceived crime than the one concocted by CREEP and the Republican Party establishment.

There can be no way yet to determine how the Donald Trump drama is going to end up. I want him out of office at the earliest possible opportunity. Whether it’s through impeachment and conviction in a Senate trial or by the next presidential election that is still about 500-some days away, it makes no difference to me.

In the annals of stupid scandals, though, the stupidity standard was set 47 years ago when those bozos broke into the DNC, only to allow Richard Nixon’s penchant for paranoia to doom his presidency.