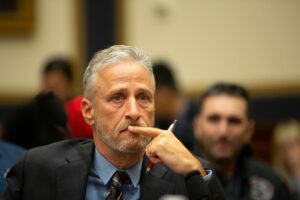 The more I hear from Jon Stewart the more I like, respect and admire him.

He’s a comedian, a writer, a producer. He’s also become an advocate for 9/11 first responders who have been caught in a legislative sausage grinder. Congress has until just recently failed to renew a 9/11 first responders emergency fund. A House committee recently voted unanimously to provide an extension for the fund, but only after Stewart tossed aside his prepared remarks and reamed the members for their inaction, their cowardice and their insensitivity toward those who rushed into the fire on that terrible day.

Those police officers, firefighters, medical personnel and civilians are paying the price. They are dying of 9/11-related ailments. Stewart has taken up their cause.

This past Sunday, Stewart appeared on “Fox News Sunday,” and was asked by host Chris Wallace to respond to those who say the federal government should cede that assistance to the states, that the cost was greater than the feds could afford.

Wallace teed the question up perfectly for Stewart, who then proceeded to hit it out of sight.

He responded, “What about Pearl Harbor?” He said such a notion is as ridiculous as suggesting that the military attack against the United States in December 1941 should be a “Hawaii problem.” He said that the terrorists committed an act of war against this nation on 9/11 and, therefore, that makes it an urgent national priority.

I cannot stop believing that Wallace knew that his friend Jon Stewart would have a ready answer to that question and I also believe that Wallace appreciated — and likely agreed — with what his guest said in response.

I am left to wonder: Why isn’t this guy, Jon Stewart, running for high public office?

2 thoughts on “Can’t this guy run for high office?”