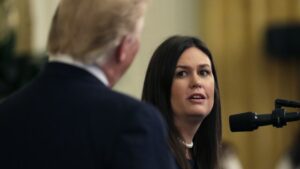 Sarah Huckabee Sanders is leaving the White House with a remarkably dubious legacy. She has played a major role in destroying the office she is about to vacate: the office of White House press secretary.

Sanders has quit conducting press briefings. She no longer stands before the press corps and answers questions. No doubt some of those questions are aggressive, even hostile. The media have been declared “the enemy of the people” by Sanders’s boss, Donald Trump.

Sanders’s then had to face that group and attempt to convey presidential policy. She did a lousy job of lying on behalf of the president. For that matter, Sanders can be “credited” with being “transparent,” if you want to call it that. She lied quite openly, even in the face of evidence that contradicted her directly.

Sure, she got beat up. Then again, so did a lot of press secretaries over many previous administrations. I wrote a blog post earlier today about one of her predecessors, George E. Christian, who served as press secretary during President Johnson’s second term. The press savaged Christian, too, over the conduct of the Vietnam War. Did that man shirk his duty? Did he ever stop delivering regular press briefings? No. He answered the call.

Now she’s about to be gone. Who will the president appoint to succeed this individual? My hope would be someone who would have the fortitude and the character to do his or her job, which is report the truth to the media, which then would report it all the public.

I have little faith that Donald Trump will do the right thing.