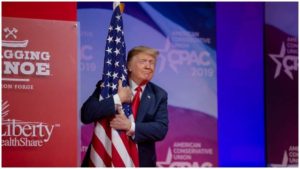 This can’t be happening, but I guess it is. When I first saw reports of this upcoming event celebrating the nation’s independence, I thought it might be a phony, made-up gossip item concocted by some Internet troll.

Turns out it’s real. Donald Trump appears intent on making the annual national Fourth of July celebration — which historically has been a non-partisan/non-political event — into something akin to a political rally.

The Washington Post reports that the president is moving ahead with plans to move the fireworks display from the National Mall to West Potomac Park. Then there’s this: He wants to address the nation from the steps of the Lincoln Memorial.

According to Mother Jones: The traditional event has been staged for more than 50 years, and has long included fireworks on the mall organized by the National Park Service, as well as a concert near the Capitol featuring the National Symphony Orchestra and a lineup of major musical stars.

The national event has been televised for many of those years by PBS.

That isn’t apparently going to happen this year. Trump appears intent on inserting himself into the celebration. Only the Good Lord Almighty knows what the president is going to say when he takes the stage in front of President Lincoln’s statue.

I get that Trump is a proud American. However, to use the high profile of his office to promote himself — which appears to be a high probability — at an event choreographed to honor the nation is a reprehensible act of partisan politics.

Trump reportedly got the idea at a Bastille Day celebration in Paris. He wanted to stage a huge military parade in Washington, D.C., to commemorate Veterans Day, but that idea has been put off for at least a year; its cost is, um, prohibitive.

The Interior Department calls the Fourth of July event a “Salute to America.” Does anyone really believe, though, that this president is going to allow such a salute to occur without taking credit for his effort to “make America great again”?

As the Post reports: The president’s starring role has the potential to turn what has long been a nonpartisan celebration of the nation’s founding into another version of a Trump campaign rally. Officials said it is unclear how much the changes may cost, but the plans have already raised alarms among city officials and some lawmakers about the potential impact of such major alterations to a time-honored and well-organized summer tradition.