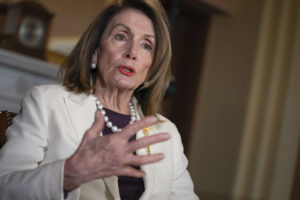 U.S. House Speaker Nancy Pelosi is as shrewd a political operative as there is anywhere at any level of government.

So, when she seeks to toss cold water on talk of impeaching Donald Trump, the upstarts within her Democratic Party caucus in the House need to take heed.

She wants to get to the whole truth behind the continuing allegations that the president sought to obstruct justice in connection with special counsel Robert Mueller’s investigation into alleged collusion with Russians who attacked our electoral system in 2016.

Pelosi also knows that no matter how fervent impeachment talk might get in the House, it will go nowhere if the Senate doesn’t convict the president of “high crimes and misdemeanors.”

Mueller’s report does not “exonerate” Trump of obstruction, as the president contends. It lays bare a whole range of activities that could be construed as obstructing justice. He just lacked sufficient evidence to file a formal criminal complaint. Mueller left it up to Congress to take up corrective matters as it sees fit.

The Democratic firebrands want to launch impeachment proceedings immediately. Pelosi is trying to tamp down that talk.

“Whether currently indictable or not, it is clear that the President has, at a minimum engaged in highly unethical and unscrupulous behavior which does not bring honor to the office he holds,” Pelosi wrote Monday in a letter to House Democrats.

She’s not ready to sign on to an impeachment proceeding, however. The speaker wants to collect more information.

I am one of those voters who believes impeachment won’t work. My preferred method of getting Donald Trump removed from office is to defeat him on Election Day 2020.

Having declared that belief, if lightning strikes and hell freezes over, there could be enough Senate Republicans who might hitch themselves to an impeachment hay wagon. Were that to happen, then by all means, get rid of Trump.

Until then, though, I stand with Speaker Pelosi’s call to conduct more congressional inquiries into what Robert Mueller has revealed before getting anything close to talking seriously about impeaching the president.