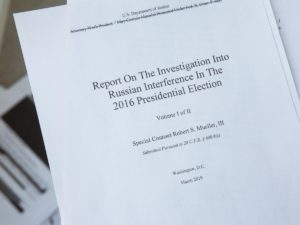 I am taking away a few impressions from the release of Robert Mueller’s findings into the Russia matter and whether Donald Trump’s presidential campaign “colluded” with Russians.

I intend to share some of them here, briefly.

Is any of this impeachable? Maybe it is. I do believe that an impeachment proceeding is a fool’s errand. House Democrats likely have the votes to impeach. The Senate is still run by Republicans. The Senate would put Trump on trial if the House impeaches him. There appears to be little stomach to convict the president; Republicans are too scared of Trump to cross that line.

I agree with GOP Sen. Mitt Romney of Utah. I, too, am “sickened” by the moral depravity exhibited by the president.

The Mueller report only deepens my desire to see Trump removed from office. He is unfit at every level to hold the nation’s most exalted public office.

My preference at this moment is for the November 2020 election to perform that task.