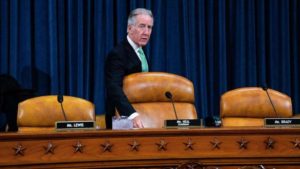 U.S. House Ways and Means Committee Chairman Richard Neal has the law on his side, or so it would appear.

The Massachusetts Democrat is using his power as a congressional committee chairman to get his hands on Donald Trump’s tax returns. He is citing a statute that requires the Internal Revenue Service to hand over any request that comes from Congress.

The president’s lawyers say the chairman is overstepping his bounds.

Donald Trump has pledged to turn over the returns once the IRS completed a “routine audit.” That audit was under way in 2015. It takes three years to conduct a routine audit? I do no think so, no matter how “big” the numbers are that Trump has suggested.

It has been matter of political custom — not the law — for presidents to release their tax returns, to open them up for public review. The custom began in 1976 after the Watergate scandal had driven President Nixon from office.

We needed to know then — and we do today — how our presidents earn their income, to whom they might be indebted, and whether they are paying their fair share of taxes. They are, after all, demanding — along with Congress — that the rest of us pay our fair share.

I’m going to set aside for the purposes of this post any discussion of The Russia Thing.

I want to know all I deserve to know — which I happen to believe is a lot — about the president’s fortune. How he amassed it. I want to know whether he skirted federal tax law. I want to know about his debt obligations; after all, Trump said he is “the king of debt.”

None of this should be kept secret from the nation he was elected to lead. Donald Trump, though, is now going back on his pledge to release those returns. He has unleashed his legal team to fight Chairman Neal’s request for the returns.

If the president has nothing to hide — which he has declared many times — then he should have no difficulty showing us what those returns contain. Isn’t that what clean-as-a-whistle politicians do?