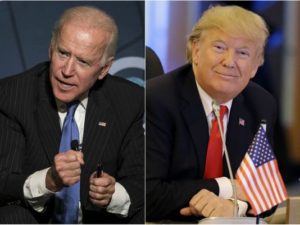 I cannot help but wonder about a hypothetical political matchup.

Former Vice President Joe Biden is going to have to answer for a complaint filed publicly by a former Nevada politician who says the ex-VP touched her and kissed her “inappropriately.” He has said he doesn’t “recall” the incident involving Lucy Flores.

Biden also is considering whether to run for the Democratic Party’s presidential nomination in 2020. So . . . suppose Joe Biden jumps into the race.

On the other side of the political chasm sits Donald Trump, the Republican president of the United States.

We all know about Trump’s Twitter fetish and how he likes to use that social medium to say some amazingly crude and inappropriate things — at timed!

What might happen if Trump — who has his own, um, admitted sordid history regarding women — decides to dive into the gutter with intemperate tweets about the allegations regarding Biden’s alleged misbehavior?

Not only do we know about Trump’s (over)use of Twitter, we also know about his utter lack of shame and his absolute lack of self-awareness.

I’m just wondering how ugly this next presidential campaign could get. My hunch, if it’s Biden vs. Trump at the end of the parties’ nominating campaigns, it is going to get hideous beyond measure.