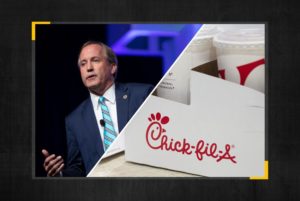 Texas Attorney General Ken Paxton put a message out via Twitter that said this . . .

The City of San Antonio’s decision to exclude Chick-fil-A based on the religious beliefs associated with the company and its owners is the opposite of tolerance. It’s discriminatory, and not only out of step with Texas values, but inconsistent with the Constitution and Texas law.

I am truly undecided on this one.

San Antonio officials have decided to remove Chick-Fil-A from its new airport terminal. Why? Because the fast-food owners have said they oppose same-sex marriage. The city said it cannot support a company that has “anti-LGBTQ” sentiments.

Paxton’s argument is that the prohibition violates the religious liberty clause in the U.S. Constitution and it runs counter to state law that bans discrimination on the basis of religion.

My own view is that I do not choose to patronize businesses on the basis of their politics. I don’t boycott films by actors whose politics differ from my own, either.

I have no particular bone to pick — no pun intended — with Chick-Fil-A one way or the other. Its food is OK. I do recall not long after the company CEO made his anti-gay-marriage comment that the lines grew long at the Chick-Fil-A in southwest Amarillo. I didn’t want to wait forever for a so-so chicken sandwich. I guess some folks in the Texas Panhandle were hot to trot over the CEO’s comment; they said, “Hell yes!” to his view and decided to demonstrate their support by waiting in line for a very long time.

This matter is much ado about nothing too much.

I think I can predict that the lines at Chick-Fil-A are going to grow long once again.

Fine. Knock yourselves out, folks.