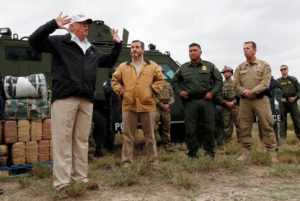 So now he’s threatening to shut down the southern border. All 2,000 miles of it. From the Pacific Ocean to the Gulf of Mexico. From California to Texas. He’s gonna shut ‘er down!

OK, but at what cost?

The trade that flows between the United States and Mexico contributes billions of dollars each year in income for businesses in both countries. I long have thought that Mexico was a good neighbor.  I still do. The president of the United States acts as though Mexico is that annoying next-door neighbor who plays his music too loudly or whose dog poops on his yard.

You may spare me the comments uttered by Jeh Johnson, homeland security secretary in the Obama administration who says the border crossing numbers have reached a crisis proportion.

Shutting down the border isn’t the way you fix a problem. You don’t punish an entire nation the way Trump wants to punish Mexico. Make no mistake, the damage he intends to inflict on our southern neighbor is going to ripple into four border states: Texas, New Mexico, Arizona and California.

He wants Mexico to stop the immigrants traipsing through its land from Central America. They can stop it, he says. If they don’t, he intends to shut down the border. “I’m not kidding around,” the president said.

I get it, Mr. President.

It’s not going to stop the drug flow that comes into this country through legal ports of entry. You know, airports and maritime docks . . . those kinds of places. Indeed, that’s where most of it enters the United States, not on the backs of asylum seekers fleeing repression in Latin America.

Send in more agents. Deploy more technology. Round up illegal immigrants, frisk ’em and then send the bad guys back. I have no problem with that.

I simply refuse to acknowledge the existence of a phony “national emergency.” It doesn’t exist. Shutting down the border is a solution in search of a problem.