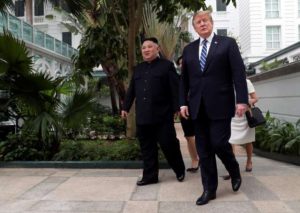 So much for high expectations.

Donald Trump flew all the way from Washington to Hanoi to meet with his new BFF, Kim Jong Un, the tyrant who rules North Korea.

Then the leaders met, shook hands, exchanged pleasantries — and then called the whole thing off! No deal was done.

Kim went back to Pyongyang; Trump flew back to Washington.

Oh, and then we have the episode in which Kim told Trump he didn’t know anything about the incarceration of Otto Warmbier, the young American who was released from North Korean custody, only to die shortly after returning to the United States.

Just as Trump took the word of Vladimir Putin, who denied interfering in our election in 2016 — despite the analysis of our intelligence community that he did interfere — the president believed Kim Jong Un’s denial that he knew anything about Warmbier’s incarceration.

The president said he takes Kim “at his word.” As if that’s worth anything? Get real, shall we?

Why in the world does Donald Trump accept the word of these tyrants? Inquiring minds want to know.

Donald Trump, of course, isn’t the first U.S. president to get rolled at high level summits. President Kennedy got his head handed to him by Nikita Khrushchev in 1961, emboldening the Soviet strongman to put missiles in Cuba; we remember how that turned out.

I cannot get past the feeling, though, that in Trump’s case this failed summit is a product of a lack of pre-meeting preparation by the White House.

The president, it must be said, took a long plane ride for nothing.

Now he gets to deal with some serious problems back home.