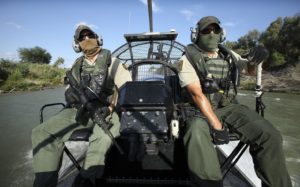 Wait for it. Members of Congress are likely to pat themselves on the back, toast each other with adult beverages over an agreement “in principle” they have reached that aims to avoid another partial government shutdown.

A bipartisan negotiating group has come up with a border security plan that provides some money for The Wall, but which falls a good bit short of the amount of money that Donald Trump insisted should be spent.

They announced the agreement tonight. They’ll draft the legislation Tuesday.

The president could torpedo this deal. He should think long and hard before he considers it.

Congress should avoid the back-slapping just because it came up with a deal that keeps the government up and running. This incredible sequence of events has been a terrible demonstration of how not to govern this great nation of ours.

The idea that we have a president who doesn’t know what the hell he is doing is bad enough. That we have a Congress that cannot craft a long-term budget that spares us this political melodrama only worsens Americans’ view of their government.

Yes, the president deserves the bulk of the blame for what we have witnessed, given his insistence on building The Wall. However, Congress isn’t full of political statesmen and women, either.