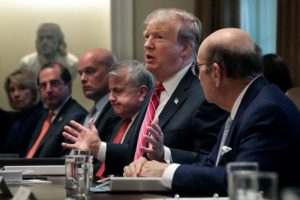 I could swear on a stack of Bibles I heard Donald Trump say the word “compromise” during his State of the Union speech the other evening.

He mentioned it as one of the benchmarks he said he seeks to set as he and Congress look for ways to govern the United States of America.

So, we have a deal to avert a partial government shutdown. The deal contains some money for The Wall, but not the $5.7 billion Trump wanted. It contains some other perks and expenditures to stiffen security along our border.

Trump returned from his campaign rally in El Paso and said he is unhappy with what a bipartisan group of senators and House members cobbled together. He said he needed time to — cough, cough! — “study” the deal that has found its way to the White House.

Effective legislating almost always requires compromise, which means no one gets what they want fully. You have to give a little here and little there and then you come up with something that is mutually acceptable.

I believe that’s what we have in this deal. I wouldn’t consider it perfect, either.

However, it moves us along and gives everyone ample breathing room to consider longer-term repairs to whatever the hell it is that troubles them.

Sign the damn deal, Mr. President! You pledged to work toward a system of government that includes “compromise.” Here’s your chance to prove — for once! — that you’re a man of your word.