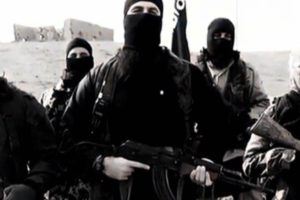 Those pesky intelligence professionals are at it once more.

Yet the president would have us believe that ISIS in Syria has been dealt a mortal blow. They’re gone. Destroyed. Wiped out.

CIA Director Gina Haspel and Director of National Intelligence Dan Coats told members of Congress today that they are not willing to buy into the commander in chief’s seat-of-the-pants “assessment” that ISIS is done for as a national security threat.

Who do we believe? I’ll stick with the intelligence pros any day of the week. Trump, as I’ve noted before on this blog, doesn’t know what he’s doing, what he’s talking, nor does he know to whom he is talking. He thinks the nation comprises hundreds of millions of rubes who buy into every single lie that flies out of his mouth.

Haspel and Coats did say today that ISIS has been “weakened” by sustained U.S. and allied attacks. For that I am grateful. The organization isn’t defeated, they said. ISIS is still capable of inflicting serious damage, causing significant misery. ISIS keeps taking responsibility for terror attacks against Muslims, which of course belies the notion that our war against terror is in fact a war against Islam; as Presidents Bush and Obama have declared, it is no such thing, that the terrorists aren’t “religious leaders,” but merely are religious perverts.

I am now wondering how the president is going to react to this contradictory testimony. Might there be more firings in store?