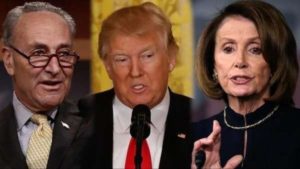 The nation’s two leading Democratic politicians — House Speaker Nancy Pelosi and Senate Minority Leader Charles Schumer — have been high-fiving each other and doing their touchdown dance ever since Donald Trump surrendered on his fight to build The Wall.

The partial government shutdown has been lifted. The 800,000 affected federal employees are going back to work and/or getting paid for their public service.

Fine. I’m happy with the result. The three-week budget deal doesn’t include money for The Wall. It now gives lawmakers and the president time to negotiate a long-term budget agreement that includes comprehensive border security, which the president says he wants.

However, I am struck by the declaration of victory that Pelosi and Schumer have proclaimed since the president’s capitulation.

They haven’t won a damn thing! They got a reprieve on behalf of the federal employees who were furloughed or forced to work without getting paid.

The border security fight still must be waged. Trump said he is willing to negotiate. I am going to presume that Pelosi and Schumer are willing, too, to search for a compromise.

I shouldn’t have to do this, but I’ll remind them anyway: Three weeks is going to evaporate quickly. We’re going to find ourselves in this mess in the proverbial blink of the eye.

Trump says he might declare a “national emergency,” even though it is highly debatable whether one actually exists along our southern border. Such a declaration would empower the president to deploy military personnel to build The Wall; he also would be empowered — he says — to divert funds from Pentagon operations to pay for the work. I do not want Donald Trump to make any such declaration, as it will prompt immediate legal action against the president.

It gets down to this final notion, which is that the very idea that the federal government cannot function fully and efficiently for longer than just weeks at a time is utterly beyond ridiculous.

My advice to “Nancy” and “Chuck” and “The Donald”?