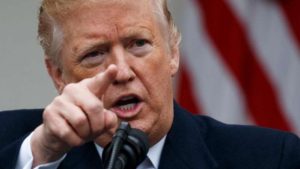 I suppose I’d never thought I would hear the president of the United States have to answer such a question.

“Have you ever worked for Russia?” came the question from a reporter.

Donald J. Trump — who had fielded that question from Jeannine Pirro on Fox News — didn’t exactly say “no” to Pirro. Then he had to say it to the reporter on the White House grounds.

I find it astonishing in the extreme that the president of the United States would ever ask the question. It has become necessary because of The New York Times story that disclosed that the FBI launched an investigation into whether Trump had become an “agent” of Russia. I just will not believe the FBI launched this probe because someone inside the J. Edgar Hoover Building wanted to “get” the president.

Do you recall the time Richard Nixon felt compelled to tell the nation that “I am not a crook”? He wasn’t very convincing at the time he said it in 1973. It turned out that while he wasn’t a “crook” in the classic definition of the term, he was corrupt enough to have to quit just ahead of a certain impeachment and trial by Congress.

This is the backdrop we might be facing yet again with the presidency of Donald J. Trump. He has called the NY Times report an “insult” and says the questions about whether he worked for Russia are “insulting.”

Meanwhile, special counsel Robert Mueller is finishing — reportedly — his report we hope will get to the truth about Trump’s relationship with Russia, if any exist. The president keeps telling us there is no relationship. He keeps yapping about the “hoax” and that Mueller is in the middle of a “witch hunt.”

It’s just frightening on its face that our head of state, our commander in chief is having to answer questions about whether he works for the nation’s No. 1 geopolitical foe.