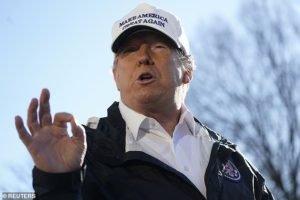 Hold on, Mr. President. Many millions of your fellow Americans aren’t going to let you get away with this one.

You now say that your boast about making “Mexico pay for the wall” did not mean that the country would cut us a check to pay for its construction.

You “meant” to infer that Mexico would pay for it indirectly. Is that what you’re saying now, Mr. President.

I have listened — along with millions of other Americans — to all that campaign-rally bellowing and bluster about how you intended to force Mexico foot the bill for The Wall. At no time did I ever hear you say, or even hint, that you intended for the “payment” to come in some form other than a direct disbursement of money from the Mexican treasury to our own treasury.

Many of us, Mr. President, have presumed that you meant what you said out loud, and very loudly, at all those campaign rallies. We also remember how you exhorted  your crowds of faithful followers to answer the question: Who’s going to pay for The Wall? They would shout, “Mexico!” You cheered ’em on!

I’ve got the link to the Daily Mail story here. You are trying to tell us what you meant to say, which I presume is not what you actually said.

You have broken faith with the suckers who voted for you.